A couple months ago Sweetie and I received a complimentary pre-release copy of “Future Worlds A Science Fiction Anthology” in return for this review. The collection contained five short stories each set in a different future world. We were not excited about most of the stories in this collection. In general, they were a little too action-packed and didn’t have many interesting ideas. But, there were a few gems in there. I would like to think of this anthology as a method for vetting some authors and their ideas to see what would make a good full-length novel. To that effect, I will rank the five stories here and review them from our least favorite to our most favorite.

Warning, there may be some spoilers. But, I’ll try not to ruin them entirely.

Horizon Alpha: High Wire By D. W. Vogel
Horizon Alpha (or what I like to call it) Jurassic World, takes place on a planet with dinosaurs. Oops, I just spoiled this one. There was a little action, too. But, the characters, plot, writing style, and invented technology are not worth mentioning. Did I mention there are dinosaurs. That’s something, at least.

STASIS DREAMS by Josi Russell
I wanted to like this story. I really did. Having someone wake up from cryogenic sleep mid-interstellar-flight to find themselves at the mercy of a dubious caretaker is a great story-prompt. I think an author like Neal Asher could take this idea and write a gripping and mysterious short story. Sadly, Josi Russell didn’t manage gripping or mysterious. On the plus side, this is pretty much the only story in the entire anthology is less than 50% action.

“ONE MAN FALLS” By Mark R. Healy
“One Man Falls” is a story of a world under alien threat from the skies. The atmosphere of the story and the main character are both solid as is the writing. But, most of the story is action. They should have named this anthology “Action Packed Worlds.” While I don’t think the world in this short-story is that compelling, it does seem like a world that could be built upon. Perhaps we have crossed into the “this story has some promise” territory. But, if we have it is just barely.

Keepers By Jared Garrett
“We don’t have a dystopia, let’s squeeze one in,” must have been said by one of the editors of this anthology. The last short story in the collection is my second-favorite. I seems a little young-adult and is (once again) packed full of action. But, I could see a full novel being written about this world. In fact, it probably should have been since the characters go from living contentedly in this dystopia to fighting-in-power in a frighteningly short time. That recklessness flies in the face “big idea” of this story which is that people must stay calm or be knocked out when their heart rates hit 140 bpm. The backstory behind this idea is clever and would have been even better had it been revealed over 300 pages.

Spera Angelorum By Michael Darling
Our favorite story from this anthology takes place in a world where many humans have inhuman power over their surroundings. Because of this, exceptional classic humans have become entertainment. Doing magic or writing great literature without being “exalted” is a thing of fascination for the future folks. So, the main characters are an escape artist and an author who put on shows for the superhumans to watch. The identities and backstories of the two heroes are crucial to the action and their friendship is worth some additional exploration. I think this could be a novel if it were injected with 100cc’s of “more expansive plot”. My personal preference would be a mystery that is stumps the exalted but is solved by a character named Arthur. 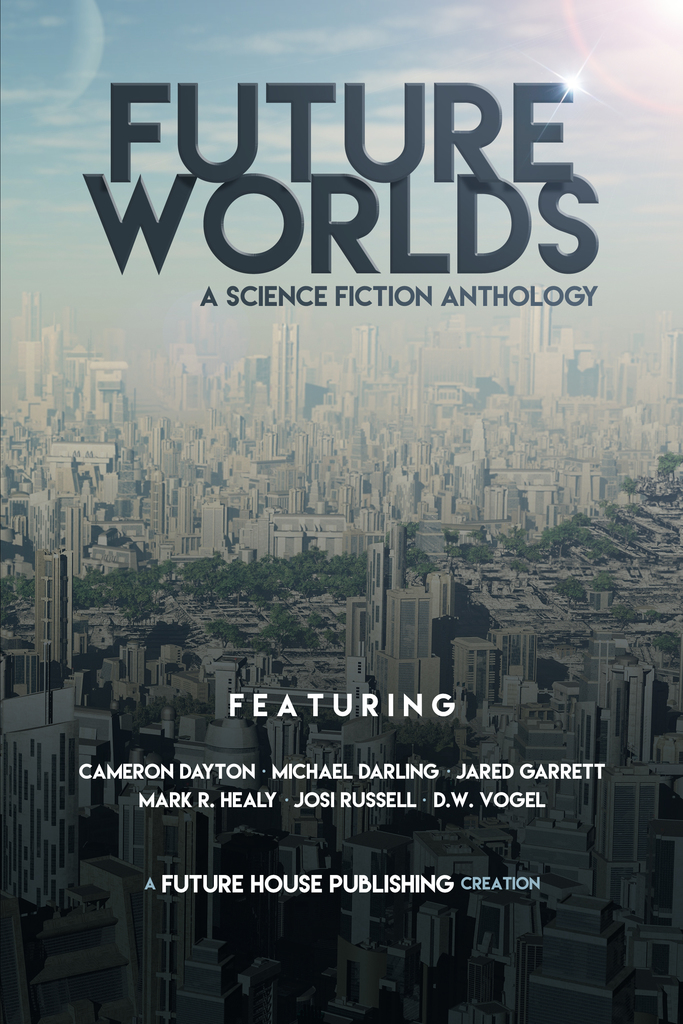