was invented in Finland by a company in the mid 1990’s. The idea is simple and a game can be completed by novice players of almost any age. It reminds me of the game corn-hole only Mölkky’s equipment is easier to transport and it might be harder for drunk players to keep score. 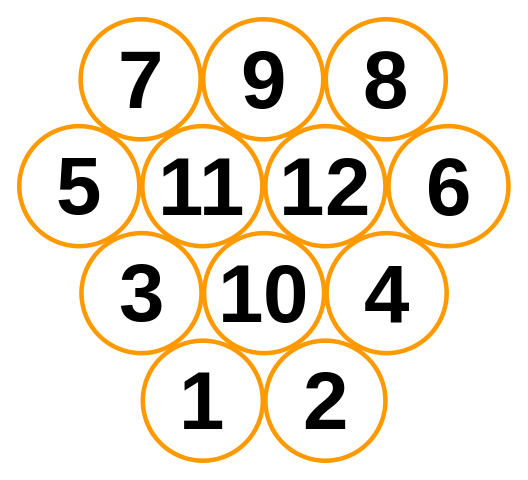 The equipment consists of 12 (numbered) scoring pins and a larger throwing pin. Each player takes a turn throwing the throwing pin at the scoring pins. If more than one scoring pin is completely knocked over (not resting on any other pin) the player’s score is increased by the number of fallen pins. If only a single scoring pin is knocked over, the player gets the score indicated by the number on the pin. The winner is the first player to score a total of exactly 50. If a play goes over 50 his/her score is reduced to 25. Also, a player is eliminated if he/she knocks over zero pins on three consecutive turns.

After each player’s turn the fallen pins are set back up wherever then ended up. This means that in the begging of the game it is pretty hard to knock over just one pin. So, players tend to score the number of pins they topple. but, after a couple turns the larger-numbered pins might be isolated enough to be targeted individually for a larger score.

We have also found that the pins tend to move away from the throwing line as the game goes on. This makes targeting pins a little harder and means that novice players should likely start at the closer end of the 10-14 feet advised throwing distance, even if that seems pretty close.

After a few turns, it is advisable to plan your throws carefully in the way that you would plan a billiards shot. You want to put yourself in a position to get to 50 without having to either make an incredible throw yourself or setup one of your opponents for an easy win. Since exceeding 50 has a pretty harsh penalty (it puts you at least three turns away from winning), you should play a little conservatively when you get close.

The above strategizing makes the game seem a little more cerebral than throwing games like corn-hole or bocce ball. Which, for a geek like me, is a real plus. However, unlike bocce and corn-hole there is more downtime between throws. If no player has been eliminated, someone needs to walk over to setup the pins after each throw.

If you don’t have a very smooth lawn to play on, you may find that the pins don’t stand very well and even tip over between throws. Our house-rule to resolve this is that when we setup pins after a throw we place them in the nearest suitable location instead of just exactly dead-center where they fell. Sometimes it also helps to twist the pin in place to level the grass beneath it. But, that might not be best for the lawn and you want to make sure that the numbers end up facing the throwing line for easier planning.

We purchased this version of Mölkky. It comes with a very nice carrying box that we also use to mark the throwing line when there is not a handy tuft of grass or other natural marker around. You should get a copy (especially if you have Amazon Prime) and try it out next weekend.